From The Archives- December 30, 2008: I got a piece of mail today I didn’t want, but was kind of expecting.

A small note card from Radar which said enthusiastically “Please open and turn over for important subscription information!” I knew right away what I was looking at. Radar is gone, and now the remaining 13 or 14 issues of my subscription will instead be (check one):

Not gonna cut it.

Radar was always struggling. Not to find it’s voice, because it certainly had one. Struggling to find an audience, maybe. irreverent but not snarky, satirical but not jokey, clever but not condescending. Hip but not Hip. And about things I found interesting from cover to cover. Radar was, as the cover declared, Pop-Politics-Scandal-Style. But maybe not in that order.

I first saw it, as the cover reminds me, in the summer of 2005. The cover has a doctored photo of George Bush lovingly placing a medal around the neck of Paris Hilton. “no talent? No problem! How to be famous for doing nothing at all.” Inside, there’s articles about a kid performer called “Zack Attack” and his insane parents, the people who portray Disney characters at Disneyland getting their freak on, the inside dope on which cable and network news anchors are morons, and maybe 20 other equally brilliant tidbits.

Issues trickled out here and there. The next one was out in 2007. it had Lindsey Lohan waving a gun at you on the cover. Articles random and fascinating. Bloods and Crips joining the army to get combat training and 3 squares a day. Britney Spears’ hometown imploding into a ghost town and a ghetto after she did the same. Drea de Matteo talking about how being on a Friends spinoff sucks and ruined her career.

I was hooked and got a subscription. the good times rolled. Felt like modern situationism at it’s best. Dada covers. Posh and Becks with OVERRATED stamped over them.Giuliani, Obama, and Hilary sprawled out naked.Bush riding an atomic bomb down, waving his hat and clutching his Bible. And, most telling and maybe the straw that went too far, Tom Cruise getting a moustache spray painted on and the words “Scientology Under Siege.”

Daring rich, famous, and powerful people to knock your block off might not be wise, but it was very entertaining. So long, Radar. Barely knew you. 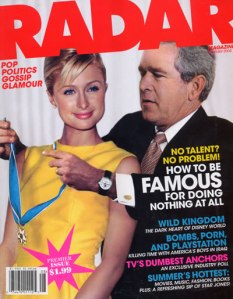 It’s time to talk about the criminally short lived RADAR Magazine, which ran sporadically between 2005 and 2008. I loved Radar, it was the perfect blend of irreverence, snark, wit, and investigative journalism. There was a sense in Radar that it would be allright to obsess and scrutinize the rich and famous, to build them up and tear them down, rinse, and repeat as long as we were self aware as we did it. Smug superiority? Sure, as long as we know what that makes us. Conversely, there was also a pragmatic sense of embracing our world (or maybe just our country) as it really is. I consider myself to be a person of reasonable intelligence, but I doubt I could point out Libya on an unlabeled map. I can, however,  quote Sweet Brown’s appearance on the news word for word. It’s about priorities. 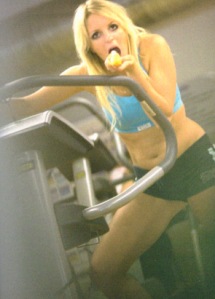 Radar did send guys over to Iraq for slice of life stories about what was really happening over there, but the real meal ticket was always their informed brand of sensationalism. My favorite article was in the June/July 2007 issue, in which a guy named Larry Getlen flew down to Kentwood, Louisiana to investigate how a small town handles being the hometown of Britney Spears during her lifetime and career low (so far, at least). The modest veteran’s museum had been transformed into the Britney Spears museum, but nobody wanted to go in anymore. The town was besieged by a constant invasion of paparazzi. Property values bottomed out as the population of a couple thousand tried to pretend like none of it was happening. You can read that article as well as several others in a similar tone by that author here. 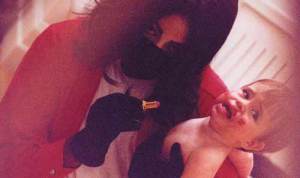 The photography here is from a woman named Alison Jackson. Dadaism and Situationism in action, she uses celebrity lookalikes to provide the images of the things we just know are really happening someplace away from our prying eyes. She has a fantastic coffee table book that you can find here. It’s a good conversation starter when company is over. 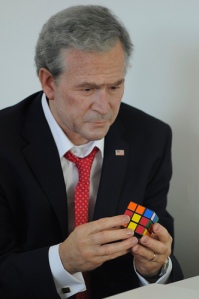 I had a charter subscription to the magazine, which I read cover to cover every time it found it’s way to my mailbox. Sometimes it was monthly, sometimes it was seasonal. Sadly, I was expecting the card I received one day telling me that the magazine was folding and the remaining measure of my subscription would be filled in by Star. Nothing but a big, dumb, lowest common denominator tabloid. To add insult to injury, Radar Magazine was bought out and replaced by Radar Online, just another TMZ style flash of trash. It feels strange, but it’s to be expected that most traces of what Radar Magazine was have been swept away. Not only is history written by the winners, so is the media. Even in our post press age.

But I’ll never forget, and I’ve got the back issues.