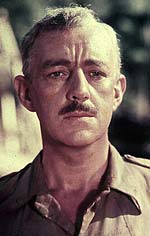 Alec Guinness in Bridge On The River Kwai, a role he probably would’ve preferred that you remember him for.

Alec Guiness liked to tell a story that has become legendary or infamous, depending upon your take. This kid came up to him somewhere and told him that he had seen Star Wars over a hundred times, and asked for his autograph. Sir Alec’s response:

“Well, do you think you could promise never to see Star Wars again?”

The boy burst into tears and his mother took him away after scolding the erstwhile Obi Wan that he had done an awful thing. In later reflections, Guinness said “Maybe she was right, but I just hope the lad, now in his thirties, is not living in a fantasy world of secondhand, childish banalities.”

Full disclosure- I’m a lad, now in my thirties, and I kinda do live in a fantasy world of secondhand, childish banalities.

But I’m aware of it, and these movies and comics and genre material of various mediums are not my whole world. There’s two things that I can tell you are the absolute keys to healthy living, after having some major tests to my mental health over decades. One is self awareness. The other is balance.These two things added together equal the sense of perspective that leads to healthy living.

I watch many of my fellow geeks really struggle with a sense of perspective in their obsessive compulsive tendencies. Being a fan of genre entertainment is much like being a connoisseur of fast food. A steady diet of it is not healthy, and you probably don’t need to spend too much more time contemplating The Walking Dead than you would the McRib.

“Comic books are trash. But that TV set is trash, and so much of music trash. And books like Peyton Place and Gone with the Wind and The Power of Positive Thinking and The Love Machine. It’s all trash.” I asked if he considered the stuff he did to be trash. “Of course,” he said. “So you like trash?” “Well, yeah, of course I like trash. Of course, human flesh is trash, too.”

Well, that’s the nail on the head. But we get into things, and we like to know everything we can about them and talk to other enthusiasts about them and compare and contrast, and that’s a beautiful thing. However, this gets really ugly when we inevitably turn hypercritical and start to scratch at ourselves, and tear at things we should probably just embrace, accept, or ignore.

An anecdote I often tell- Once I was at a comic shop (Comic Book World, for those familiar with Louisville) and there was a guy -kind of a goober, but he meant no harm- that we’ll call Fanboy Type A. He was very excited about Wrestlemania, which had occurred over the previous weekend. He couldn’t wait to tell us all about the Undertaker’s new look and the way the stage was set when he came out. Apparently it was as if the Gates Of Hell had opened and unleashed a powerful warrior, and it was the greatest thing this guy had ever seen.

This showing of enthusiasm did not sit well with a gentleman across the room that we can call Fanboy Type B, and it seemed as if he had absolutely no recourse but to piss on the parade. The indictment came on quickly and furiously. The stage looked fake. Undertaker is fat. He’s too old to be out there. And in the ultimate kick to the downed opponent, his hat looked stupid. Now, keep in mind that nobody asked this guy.

Type A blanched, looked at his shoes, and muttered “Well….I thought it was kinda cool…” He had actually allowed the Type B to steal his joy on something as mundane as the validity of a professional wrestler.

Too many of those thirtysomething lads with their secondhand, banal fantasies aren’t even enjoying them, either because they’ve allowed them to be ruined by malcontents or they are malcontents themselves.

One of the best new comics is Saga, created by Brian K. Vaughn. I’ll leave you with something he said:

I realized that making comics and making babies were kind of the same thing and if I could combine the two, it would be less boring if I set it in a crazy sci-fi fantasy universe and not just have anecdotes about diaper bags … I didn’t want to tell a Star Wars adventure with these noble heroes fighting an empire. These are people on the outskirts of the story who want out of this never-ending galactic war … I’m part of the generation that all we do is complain about the prequels and how they let us down … And if every one of us who complained about how the prequels didn’t live up to our expectations just would make our own sci-fi fantasy, then it would be a much better use of our time.